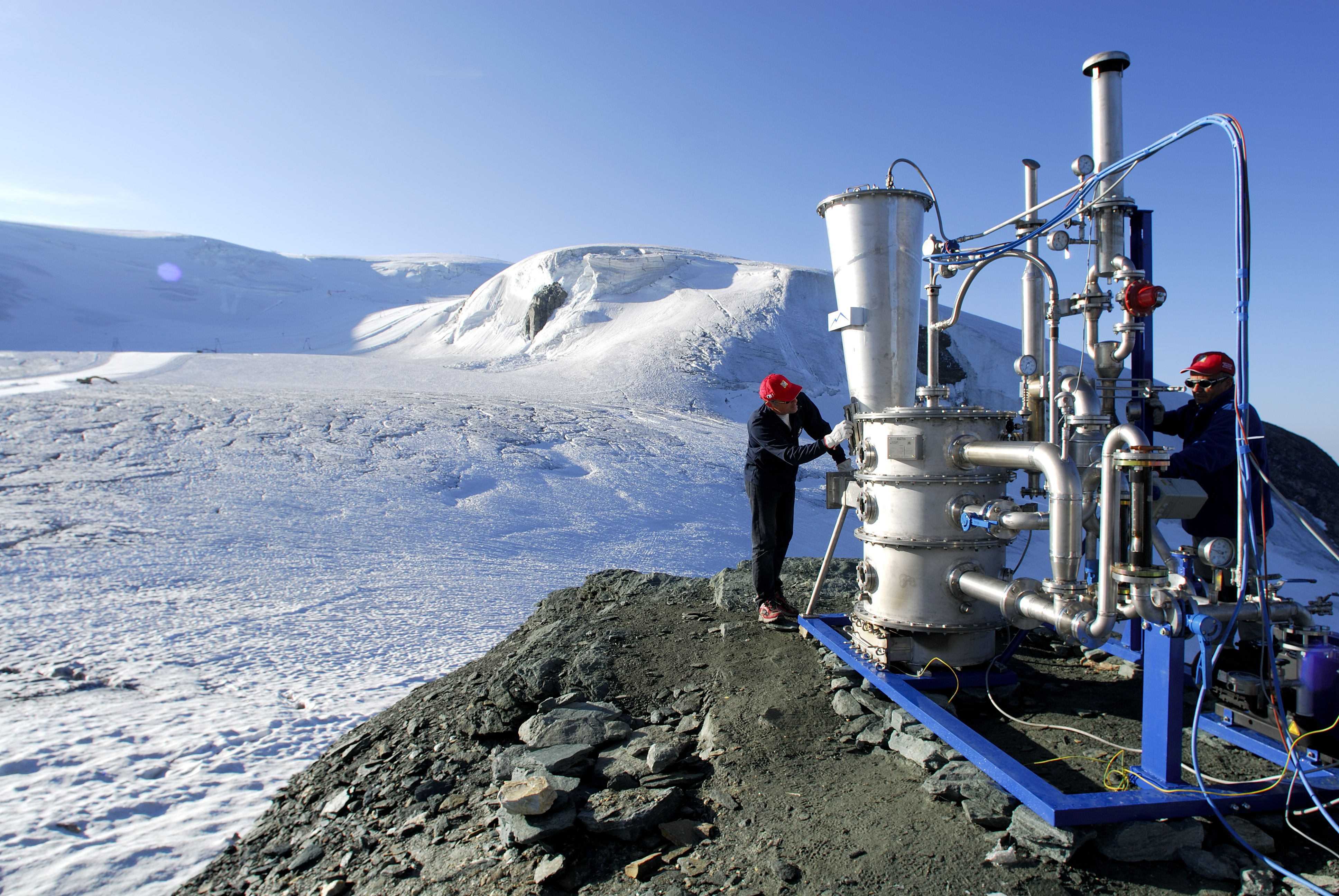 Earth is a project started from cooperation between Actelios (company of Falck group) and Committee Ev-K2-CNR that controls scientific station “Pyramid” on Everest Mountain in Nepal, to make a device for burning waste, trash and goods left on glaciers and high altitude mountains and natural parks. Developed supported by experience in energy and thermo-burning (Actelios), alpine and trekking experiences (Committee Ev-K2-CNR – Mountain Equipe) with process engineering and experience in production of pressure equipment (Bertocchi Impianti), it is the final product of an important team work, in terms of target and final use.

Actelios, a Falck Group’s company and leader in the field of energy from renewable sources, along with the Ev-K²-CNR Committee, the reference organization for scientific and technological research activities in mountainous areas, have jointly devised a complex, applied research project for contributing to the environmental safeguard of remote, high altitude places, named EARTH Ecological Activity For Refuse Treatment At High-Altitude©

It is a prototype equipment for thermal treatment of waste left behind by mountain and trekking expeditions, local communities and high-altitude mountain parks, suitable for operating in extreme environmental conditions where rarefied oxygen and the total absence of electric power imply the necessity for finding ground-breaking technological solutions.

EARTH shall enable the total disposal of waste produced by mountaineers during their presence at high altitude. Litter, for example, which is the result of as many as 811 alpine teams that, commencing from the beginning of the year 2000 to date, according to figures released by the Nepali Ministry of Tourism, have transited in the Himalayas from the Nepalese face, 125 of which heading for the Everest.

The numbers translate into an enormous amount of garbage. Statistics provided by the Sagarmatha Pollution Control Committee (the local environmental conservation institution for Mount Everest) reveal that the world’s tallest mountain hosts about 12.8 tons of waste annually at base camp alone. Add to that the tons of trash deposited at higher sites. And all this refers solely to the southern ridge.

The quantity of waste would be enough to fill as many as 4 railway wagons to the brim. Although less crowded, the K2 region, in the Karakoram range, presents a similar emergency.

EARTH will be the solution to such a legacy. Designed as a series of sectional elements weighing not more than 20 kg each, in order to enable bearers to haul it easily by shoulder, it is in a position to reduce the garbage mass by 97%, operating in complete autonomy and compatible with the rather delicate surroundings; it is also fully compliant with applicable national and international regulations.

Thanks to its user-friendly design and simple maintenance procedures, the equipment shall be handed over to the local populace that shall oversee its global operations.

At full operating capability, this waste-treatment unit will allow for a thorough thermal treatment for disposing of refuse produced during an entire excursion season that witnesses an average of about 4,000 trekkers and 18,000 local escorts. The whole process will take place with full respect of the environment and contribute to the development of a culture relating to sustainable disposal and environmental safeguards, even on the world’s roof-top.

The plant, presented to the press in Cervinia today, will be shipped, in September 2006, to the Central Karakoram National Park, at the entrance of Baltoro (the valley leading to the K2) and installed at a height of 3,400 metres. Subsequently, the unit will also be utilised at the Sagarmatha, Mount Everest’s National Park, and installed at an altitude of 4,700 metres.

In light of the agreement signed with the Ev-K²-CNR Committee, the Alpine Club of Pakistan, within the sphere of the Karakoram Trust project, has arranged to collect the garbage of the 2006 alpine season, to be disposed this fall with the aid of EARTH.

Garbage, prepared and stored in a loading bin, undergoes high-temperature treatment in a combustion chamber after the unit has been suitably heated with the aid of a burner. The hot air consequently generated is then conveyed to a turbo-blowing section, activating a turbine connected mechanically to a compressor. The inhaled outside air reaches the set pressure and mixes with part of the fumes; this process allows the combustion chamber to have the right quantity of oxygen for operating the unit and producing the heat for waste gasification. In this way, the plant burns the gas produced by the waste; solid, non-combustible portions fall into a collection tray below. At the end of the process, fumes spewed out are purified via a state-of-the-art, anti-particulate catalytic filter, specifically designed to the end of obtaining the maximum purification of effluents released into the atmosphere through a dedicated stack. Particular attention has been paid to the environmental sustainability of EARTH. The unit was designed and developed in a way as to ensure full compliance with the most stringent Italian and international regulations with regard to both combustion and emission. The system’s calibration called for the registration of as many as three patents.

Characteristics of the plant: 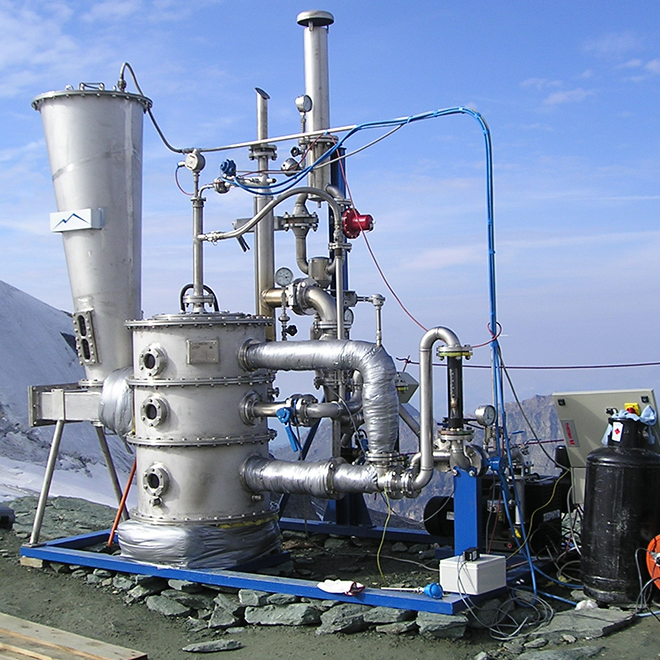 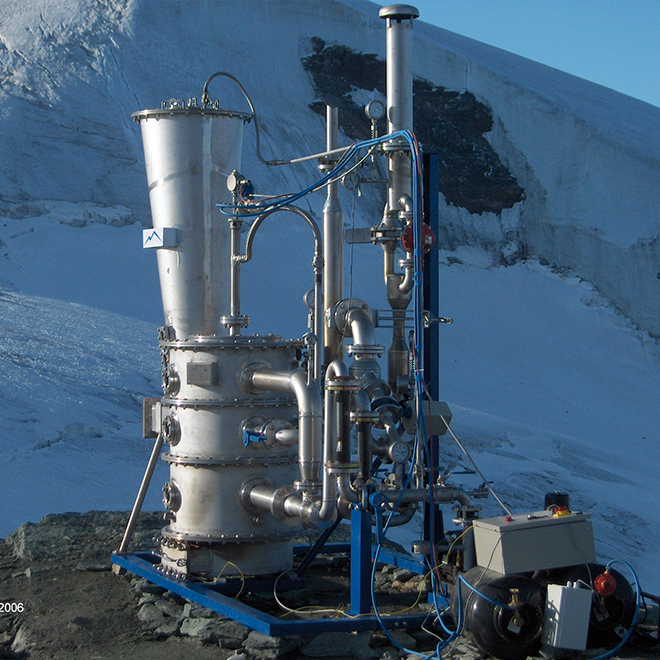 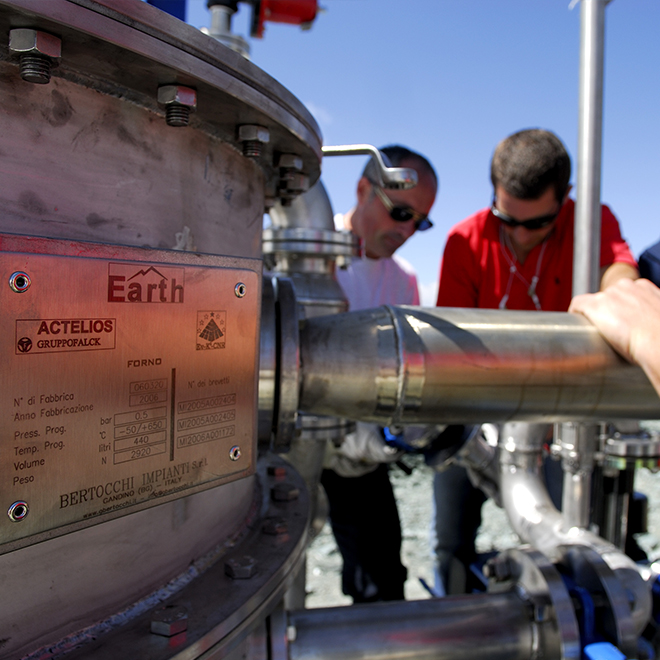 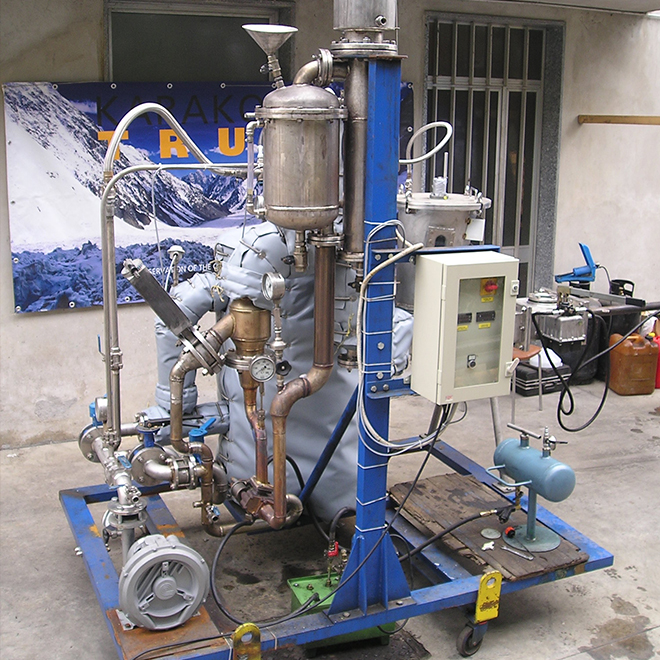